The world is a better place than it used to be. A more sparkling, electric, decadent time.

Welcome to the Crystal Age; to the neon spires of the glorious Chrome Dynasty, in the Flower Court of the Plastic Empire. The nobility of the Crystal Age blur the lines between pop divas, celebrities, warlords, and despots. To live among the upper echelons of the neon spires is to live a life completely devoid of strife or suffering. When you are lifted up to the silicon gardens from the concrete jungle below, there’s never a reason to shed your aluminum wings.

The Chrome Dynasty has ruled the Neon Spires for four generations, and their quicksilver grip never wanes. Under their prosperity, the Plastic Empire has experienced a new era of untold peace. One of the most ingenious decisions of Kein TX Milo 3 of House Chromis, the previous Kein of the Plastic Empire, was to consolidate the greatest warlord-babes and slaughter-divas of the nobility and focus their minds on the most important task facing the celebrities—marriage and love. The Flower Court is the place where the powerful come together to flirt and debate and, just occasionally, murder each other.

But what’s the nouveau without a little bit of murder?

The Flower Court is a game about a group of incredibly powerful pop stars / feudal nobles backstabbing each other and turning against each other in the pursuit of their secret goals. In The Flower Court, you take on one of twelve character sheets, including the noble Prinxarch, the war-hungry Doxe, the mysterious Stranger, the tricksy Baronne, or the nervous Cinderella. You create a character riffing on bizarre aesthetics and unique names, and select a mysterious hidden goal. Over the next several hours, you and your fellow players ask each other questions, send each other valentines, propose to each other, and attempt to assassinate each other, all with unique end goals. Maybe you want to marry the Prinxarch and ascend to the throne. Maybe you just want to find true love. Maybe you're here to cause problems and break hearts. Or maybe, in the end, you just want to make it out of here alive.

The Flower Court is a game for 5-12 players, and takes around 2-3 hours. The full PDF is 26 pages long, and contains rules on adapting for online play, help with flirting, safety mechanics, sample setting questions, and a dozen character sheets, along with a gorgeous cover by Taz Meyers. The rules are intuitive and easy to grasp, and the game has been playtested extensively, both in real life and online.

The mechanics of the game are based on games the author would play when they were a teen, and naturally lead to engaging stories and exciting moments. The Flower Court is fundamentally queer, and heavily incorporates camp aesthetics and complex relationships to gender and identity.

While The Flower Court was designed to be about representations of romantic desire, it also contains multiple characters who are disconnected from romance, and every character has tools for being aromantic.

The Flower Court is the perfect game for when you want to take a break from the alienation of daily life and embrace a delightful mockery of how the 1% must surely have it.

“The Flower Court is the reality tv that you guiltily wish you could watch.”

The Flower Court is a game that gives you permission to flirt with all your friends even as you slide the knife between their ribs. They see you doing it, or maybe they don't, but it doesn't matter- this is just another level of your desires, the perfect accessory to your arch-fashions and resplendent genderous masks. The first time I played I kept thinking of the game for a week after, the experiences delicious and lingering.

The Flower Court evokes the same thrill and anticipation of middle school truth or dare, but gleefully rips away the layer of shame brought on by the compulsory heterosexuality of my upbringing. Play this game to fall in love, topple society, do crime, and avenge your past.

As someone always looking for new experiences to share with people, the way Flower Court can utterly change a crowd of people over the course of a game astounded me. As a game designer, I'm shocked by how all that arises from such a clean and clear ruleset. And as a queer enby, hafkghgsukgh.
You owe it to yourself to try this out.

In order to download this game you must purchase it at or above the minimum price of $10 USD. You will get access to the following files:

Support this game at or above a special price point to receive something exclusive.

Claim a community copy to get a free copy of the PDF, no questions asked. Every time someone purchases a physical copy, a new community copy will be added to the pool.

I may be dumb, but I cannot find the commands for the bot

Typing in "#help" will bring up the available commands. I only found this by guessing, so you didn't miss anythin

Hi, I'm sorry for the late reply! I need to reread the rules but the intention is that you can send as many assassination attempts as you want, and up to one proposal. You can't send more than one assassination to the same person. You *can* propose and assassinate someone, IIRC. I gotta double check what the text says but that's how I meant for it to be!

Hello! I was hoping to use the Discord bot, but when I click the link (https://discordapp.com/oauth2/authorize?client_id=676825279322259459), I get a 'no scopes provided' error. Is there a way to link to a description of the bot or the source code somewhere?

if you add &scope=bot to the end of the link it works!

Thank you so much! I have updated the link.

okay so image you're playing mafia with your friends but instead of going in rounds wondering who's who you're all flirting with each other and pretending to be the most extra and evil people you can imagine while being dumb and queer. If i was better at describing stuff I would say that's how playing flower court feels. this game has killer aesthetics, inspires role playing, and is ridiculously fun.

I got to playtest The Flower Court, and wow! It's a secret objective game, a little like werewolf, except the werewolves are all cyberpunk aristocrats flirting murderously with you.

(More games should involve a mailbox mechanic; it's very fun.) 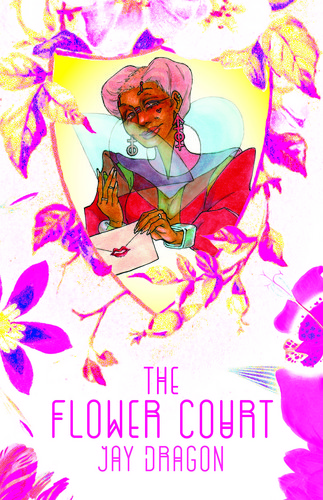 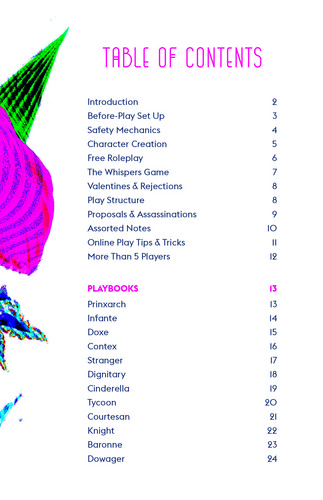 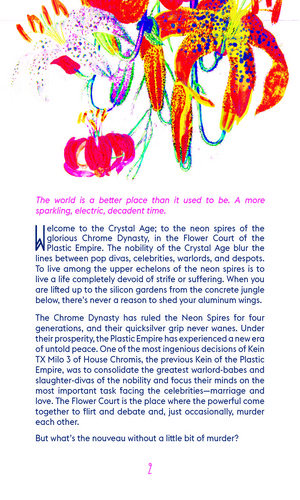 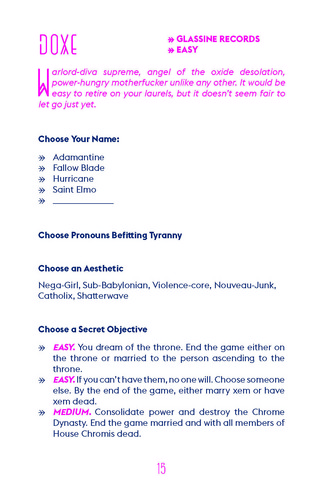